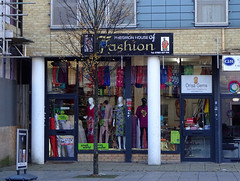 The left-hand unit was vacant as of December 2014, though with stuff inside photo. As of April 2015 there was a sign in the window stating that a glaziers called Moonlight Glazing would be opening there soon. However, as of July 2015 there was still no sign on the frontage, and the interior indicated that it wasn't open to the public photo taken through window.

Some time between July and December 2015, a dressmakers called Phegiron House of Fashion opened up in the left hand unit photo.

The right hand unit was open by December 2014 as Option Mobiles photo, selling gifts and mobile phone accessories. By April 2015 it was also offering cargo delivery photo. Some time between March 2017 and June 2018 this became Smartfix Tech photo, and some time between then and November 2019 it was taken over to become part of Phegiron House of Fashion.