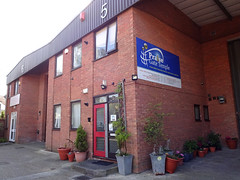 It was previously known as Praise Baptist Church photo, but rebranded to Praise Gate Temple some time between March 2012 and April 2017.

As of December 2019, it also operates a foodbank on Mondays, Tuesdays, and Fridays.

According to a foodbank helper as of December 2019, the church had been open for at least eight years at that point.