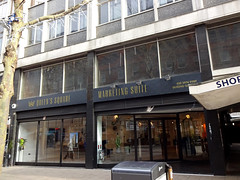 Business premises on the corner of the High Street and St George's Walk. As of December 2018 it's being used as a marketing suite for Queen's Square (the planned redevelopment of St George's Walk).

The premises were previously occupied by a discount clothes shop called Madhouse photo, which closed some time between May and August 2012. As of August 2012 it was vacant and shuttered photo.

Brooklyn Big And Tall, a clothes shop specialising in large men's sizes which was previously a few doors down at 7-9 St George's Walk photo, moved in at some point between March 2013 and September 2013 photo of shop, photo of sign. They also did clothing alterations via a sub-business called A1 Alterations photo of sign.

As of late February 2018, Brooklyn Big & Tall was having a closing-down sale photo of signs and planning to close in mid-March. The closure took place some time between February and June 2018, though their Sutton branch remained open. According to their website, the reason for the closure was that "The area is going through massive regeneraion [sic] hence it was not feasible for us to continue to trade in Croydon."

The premises were vacant as of June 2018, and still vacant as of August 2018 and October 2018. By December 2018 it was being used as a marketing suite for Queen's Square (the planned redevelopment of St George's Walk) photo.