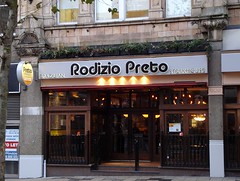 It was previously a Brazilian restaurant called Rodizio Preto, part of a small chain. This opened on 2 December 2012, but closed down again some time between October 2018 and October 2019 photo.

The premises were previously occupied by a branch of the chain tapas restaurant La Tasca photo. La Tasca relinquished its leases on a number of sites in Autumn 2012 after entering a company voluntary arrangement (CVA). The Croydon branch was one that did not survive this, and had closed by November 2012.

It then became a branch of the Brazilian restaurant chain Rodizio Preto, which opened on 2 Decembe 2012. As explained by a sign in the window photo, rather than choosing your dishes from a menu, at this restaurant you'd visit the buffet of salads and hot dishes, then sit down at your table where "passadors" would bring you grilled meats and carve cuts to your liking. All this was at a fixed price photo of price list as of December 2012, though drinks and desserts are extra. It was also possible to order just the buffet without the grilled meat.