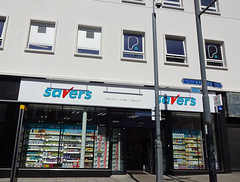 Discount homewares and personal care shop on the Crown Hill end of Church Street. It opened some time between June 2018 and March 2019.

By March 2012 it was a homewares shop called Ponden Home Interiors photo.

It had a few other "closing-down" sales over the years, before eventually closing in April 2017. As of late April 2017, the premises were vacant and stripped out, and the Ponden Home Interiors signage had been removed to reveal the old Rosebys signs photo.

It was still vacant as of March 2018. As of June 2018, the ground floor was boarded up, the upper floors were at least partially occupied by Puregym, and there were signs up advertising seven new flats photo.