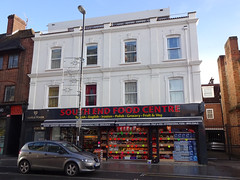 Supermarket on South End. It opened in late 2019.

It was previously a bike shop called Geoffrey Butler Cycles photo, but this moved to 429 Brighton Road, CR2 6EU, in March 2016.

Still vacant as of September 2019, but there was shopfitting work going on photo, and it had grown a storey since we last photographed it (in July 2016). By the end of the month it had acquired a sign reading "South End Food Centre" and was advertising Turkish, English, Iranian, and Polish groceries as well as fruit and veg photo; this was at least partially open by November 2019, though they didn't seem to have got the fruit and veg started yet.