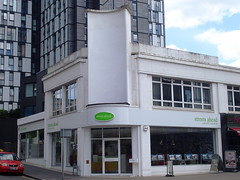 Estate agents on the High Street.

Previously occupied by a white goods and electrical appliances showroom called Redhill Appliances photo, which closed some time between February and October 2013.

It was vacant as of October 2013 photo. As of March 2014, signage in the windows indicated it would be opening soon as a branch of Streets Ahead estate agents. Streets Ahead was open by late June 2014.