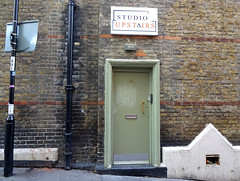 Artists' studio on Drummond Road, just off North End. It's run by a charity aiming to support people with mental health problems.

It opened in May 2016, originally at 2-4 Park Street, but moved here by the end of July 2018. Before moving from Park Street it offered drop-in art sessions and put on exhibitions, but in the new location it's now just a studio, not generally open to members of the public.