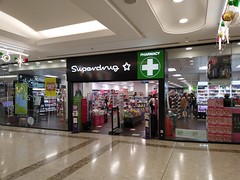 Health and beauty product shop in Centrale, with an in-store pharmacy.

It was previously a clothes shop called Oxygen Red photo, which had been there since at least July 2012, but this closed down some time between July 2015 and September 2016. The premises were vacant and boarded over as of September 2016.

As of November 2016 there were signs up saying Superdrug was coming soon; according to the Croydon Advertiser this would be in addition to the Whitgift Centre branch, not a replacement for it. The new Superdrug was open by early January 2017.