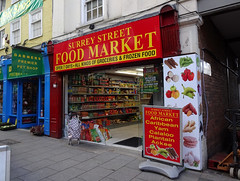 It was previously a halal butchers which also sold a number of African and Caribbean ingredients, such as ground and whole egusi and ogbono, ground crayfish, tinned callaloo and ackee, dried and tinned pulses, rice, herbs and spices, and oils. They had a small selection of fresh vegetables too.

It was first known as Eman Halal Meat photo, but this name vanished from the frontage some time in 2014 photo, and between November 2014 and February 2015 a new sign appeared for AMJ Halal Meat & Grocery photo. Nothing else seemed to have changed though.