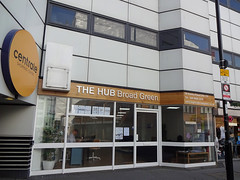 Community centre in Centrale, with a frontage on Keeley Road. It opened on 30 July 2019 with funding from the Big Local project.

It was previously occupied by a social enterprise cafe called Mum's The Chef photo, which opened in November 2014. However, this closed down again some time between April 2015 and June 2018.

It was still vacant as of December 2018.

As of May 2019 it was under refurbishment to become a community centre called The Hub Broad Green photo. This opened on 30 July 2019.