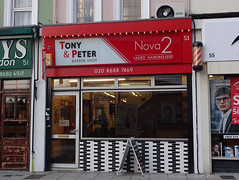 Barber and hairdresser on Frith Road.

According to an old sign revealed during refurbishment work in June 2015 photo, it was once a business called Towers & Co Ltd.

According to a photo on Flickr, it's been Tony & Peter/Nova since at least December 1990.