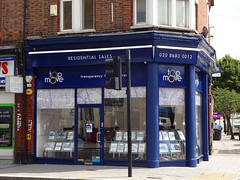 According to a photo on Flickr, as of 1969 the premises were occupied by a business called either Whitgift Galleries or A W John Simmons & Son (most easily visible at original size).

It was vacant (but had apparently been let) as of July 2012, with old signage indicating that it used to be a home improvement business called Chardon Interiors photo.