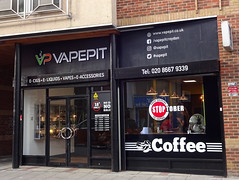 As of January 2012 the premises were occupied by a British greasy-spoon cafe called Sam's Cafe photo, but this closed some time in late 2013 or early 2014 (on looking through the shutters in April 2014 the tables all seemed to have been removed). See photograph of Sam's Cafe cumberland special breakfast (January 2012).

By November 2014 a Caribbean cafe/restaurant called Caribbean Cafe photo had opened. According to a sign in the window in December 2014, it was halal. As of November 2014 it advertised breakfast from 7am, full menu from 11:30am, and an all-you-can-eat buffet at lunch and dinner photo of sign. It closed down some time in 2016 (probably).

A vape shop called Vapepit opened some time between April and October 2017.