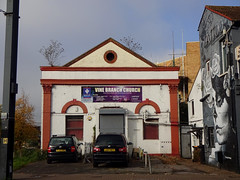 Christian church on Tamworth Road. As of September 2014, the signage is up but we're not sure if it's quite open yet.

The building was previously occupied by the Croydon Muscle & Fitness Gym photo.

According to Cinema Treasures, the building was constructed in 1873 as a Salvation Army hall and reopened as a cinema in early 1910. The cinema was renamed the Star Cinema in March 1912, and operated until 1917.

By July 2012 it was the Croydon Muscle & Fitness Gym photo; see also photograph of flyer from December 2012. This closed some time between October 2013 and May 2014, and as of May 2014 the interior had been stripped out photo taken through window.