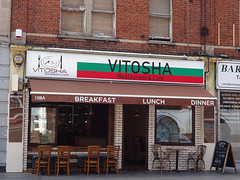 Bulgarian restaurant on the High Street. It opened some time between October 2017 and June 2018.

The premises used to be occupied (in 2004 or so) by an Argentine restaurant called La Brasa Latina.

By July 2012 it was a Balkan and Mediterranean restaurant called Caprice photo. This closed down some time between October 2017 and June 2018.

Accessibility: A step to get in. Toilets are down a flight of stairs with a handrail on one side; this handrail is quite hard to grip at the top as it's flush with the wall.