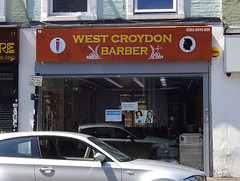 Barbers on London Road. It opened some time between October 2017 and June 2018.

See The Past and Present of Croydon's London Road for history up to the mid-2010s, at which point it was an employment agency called Plan Personnel photo. Plan Personnel closed down some time in 2016 or early 2017.

As of February 2017 the premises were vacant and stripped out photo taken through window. Still vacant as of October 2017.

By June 2018, a barbers called West Croydon Barber had opened up photo.