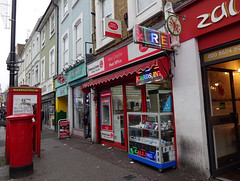 It has one external cashpoint which doesn't charge for withdrawals.

It was previously known as Posh Afro Cosmetics photo, but some time between September 2013 and May 2014 the signage changed to read "Posh Cosmetics" photo. Around the start of 2015 the "Posh Cosmetics" sign was covered up, but according to a member of staff this was just to get rid of the Lebara branding, and the shop itself had not changed. By October 2016 it had started selling mobile phones and phone/tablet accessories instead of the beauty products.

Accessibility: No step to get in. Quite small inside.