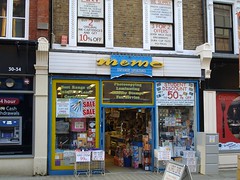 According to the frontage as of February 2012, they offer photocopying, laminating, rubber stamps, and a fax service.