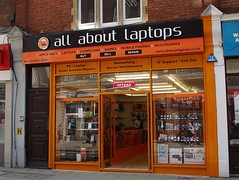 All About Laptops opened some time between February and July 2012; the premises were vacant as of mid-February 2012 photo and before that were occupied by Gamestation (as of July 2009, according to Google Street View and also to a photo on Flickr).
Existence last checked in August 2014.
George Street ...