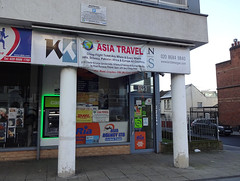 Some time between December 2014 and July 2015, Zaar Properties became Axis Properties photo. Ur Travel initially appeared to still be in place, but by September 2015 had moved to Lewisham.

By April 2017, Axis Properties had been replaced by Krishmorgan Solicitors, and a cashpoint had been installed. As of July 2018, it was unclear whether the solicitors were still operating here. There was a "to let" sign in the window, and their website gave a contact address of 23 Whitestone Way, but there seemed to be people inside when we went past photo.

By January 2019 Ur Travel was back, operating under the name of Asia Travel photo.