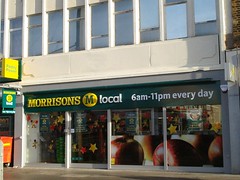 Supermarket on North End, near West Croydon Station. It's due to open at 9am on Monday 9 December 2013 photo of sign.

Previously a branch of Jessops.

It was bought by Morrisons in February 2013, and according to the Croydon Advertiser was planned to open as an "M Local" store. As of November 2013 work had started on the site photo.