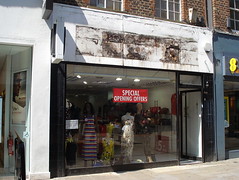 Clothes shop on North End. It opened in June or July 2014. As of late July, there's no name on the frontage but the owner told us he was thinking of calling it "Miss Selfie".

A new clothes shop opened in July 2014, initially with no name on the frontage. The owner told us he was thinking of calling it "Miss Selfie".