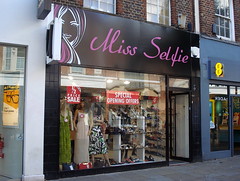 Clothes shop on North End. It opened in June or July 2014.

A new clothes shop opened in July 2014, initially with no name on the frontage photo. The owner told us he was thinking of calling it "Miss Selfie".