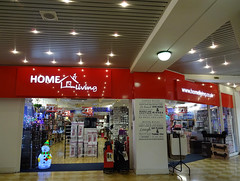 Furniture and homewares shop on the lower level of the Whitgift Centre. It was previously at 34-36 North End, but moved here in late 2015.