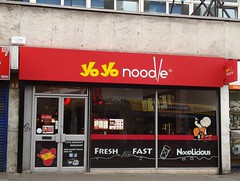 It was vacant and advertised to let as of July 2012 photo. As of July 2013, it was still vacant, but with a sign up stating that Yo Yo Noodle would be opening there soon photo. Yo Yo Noodle was open by early October 2013.
Existence last checked in December 2013.
High Street ...