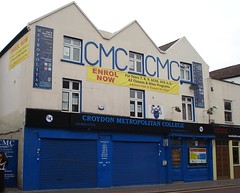 Previously known as Croydon Tutorial College. Specialises in business, IT, tourism, and hospitality.

The premises were not always used as a single building. In the past (certainly as of December 2006), number 28 was occupied by a South African Indian restaurant called 1860; we're not sure what numbers 30 and 32 were at this point.