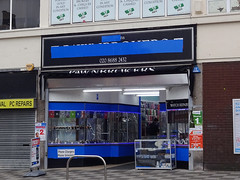 Mobile phone accessories/repair shop on North End near West Croydon Station. It opened in January or February 2016, but as of February 2016 still has no name on the frontage.

It remained vacant as of December 2015, but as of early January 2016 there was some sort of building or shopfitting work going on inside, and by mid-February 2016 it was open as a mobile phone accessories/repair shop (though with no name on the frontage).