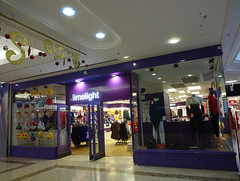 Clothing and accessories shop in Centrale. It opened some time between September and November 2016.