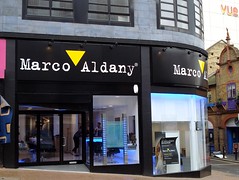 Hairdressers at the Crown Hill end of Church Street. It opened some time in August or September 2012.

The premises were previously occupied by Möben/Sharps/Dolphin (Homeform Group), which went into administration and closed its Croydon showroom in June 2011.