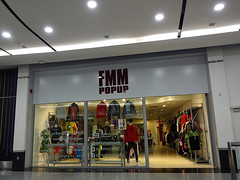 Clothes and accessories shop in Centrale.

It was previously a branch of the Early Learning Centre photo, but this closed some time between November 2013 and April 2015.

By March 2016, it was occupied by a sweet shop called American Candy photo, but this closed down sometime between March and September 2016. The unit was still vacant as of April 2017.

A candle shop called Yankee Candle opened up some time between April and November 2017, but closed down again by January 2019.