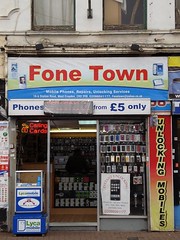 According to a photo on Flickr, as of c. 1985 the premises (along with those of neighbouring A & S Trading Agency) were occupied by a Help The Aged charity shop. According to another, by 1989 this had become the Helping Hand "charity gift shop".
Existence last checked in October 2013.
Station Road ...