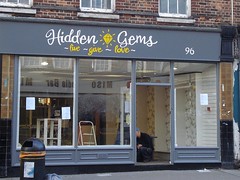 Charity shop on the High Street, due to open on Monday 2 December 2013. It's associated with the Buddhist Centre next door.