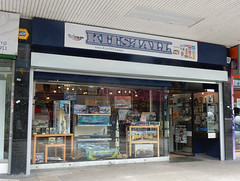 Note: As of June 2018 we haven't seen this open for a while; it may have closed down.

By July 2015 signage for a scale model/toy shop called Kits4all had appeared photo.