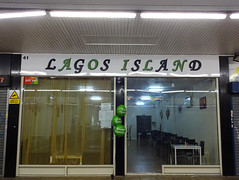 Nigerian takeaway on St George's Walk. It opened in October 2017, initially also operating as a restaurant, but switching fairly soon to takeaway and delivery only, with online ordering via Deliveroo.

The premises were previously divided into two units, 41 and 41a.

By July 2012, number 41 was a Caribbean bakery and takeaway called Price Right Bakery photo, but this probably closed some time between April and December 2015; it was definitely closed by July 2016.

Number 41a was vacant as of August 2012, with signs suggesting it was previously occupied by Madeira Restaurant photo. Around January 2014 a sign photo appeared on the shutter stating that a new girls' and women's clothes shop called J E Star would be opening there soon. However, there were no signs of this on our July 2014 survey. It was still vacant as of August 2014, late September 2015, December 2015, and mid-May 2016.

As of July 2016 the two units had been amalgamated and building work was going on inside photo. As of November 2016 this had acquired a sign reading "Lagos Island" but was still gutted inside. The situation was the same as of March 2017, April 2017, and June 2017.

The new restaurant had a friends-and-family-only soft opening on 30 September 2017, and was due to open properly on 6 October 2017.