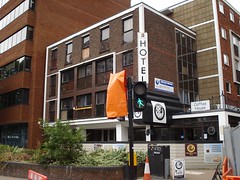 It also used to have a coffee shop called Coffee Monkey, but this closed down in late August 2016.

The Italian restaurant used to be called Cotto e Mangiato photo, but changed its name to Buongiorno Burgers in June or July 2014 photo. By December 2014 it had changed again, to Salve.
Existence last checked in May 2016.
Wellesley Road