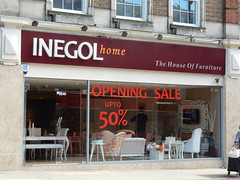 Business premises on the High Street, vacant and to let as of late June 2017.

It was previously a furniture shop, initially under the name Inegol Home (pictured) and then as Novita photo of sign, but this closed down some time between April and June 2017.

As of January 2015 there were signs on the front indicating that it would be opening soon as a branch of Inegol Home, a furniture shop. This opened in March or April 2015. It was rebranded to Novita in early 2017, but closed down completely by late June 2017.