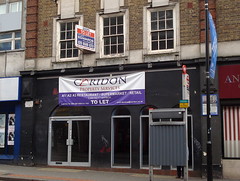 It was vacant by July 2012, with signage indicating it was previously occupied by an Indian restaurant called Karahi. Still vacant as of November 2014.

As of January 2015 there are signs on the front indicating that it'll be opening soon as a branch of Inegol Home.