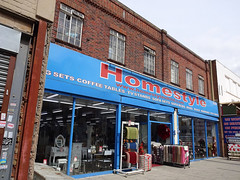 As of November 2017, there are signs in the windows stating that it's closing down photo, and according to a member of staff this is likely to happen some time in December.

According to a photo on Flickr, as of December 1990 this was a shop called Fads Homestyle.
Existence last checked in November 2017.
Church Street ...