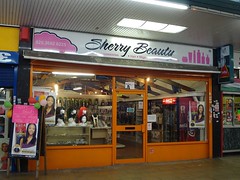 As of January 2014 a sign for Sherry Beauty appeared above the shopfront, and it had opened fully by March 2014.