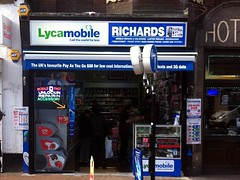 It was previously a newsagent/tobacconist under the same name photo, but had a change of management and focus in early 2014.

According to a photo on the London Tramways website, there was a shop called Richards there in the 1930s/1940s, though it's not clear what type of shop it was.