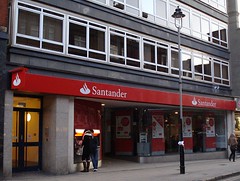 Note that there's another branch of Santander a short distance along George Street, at number 66-68.

Previously a branch of Abbey (as of July 2009, according to Google Street View).