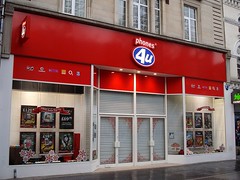 Note: Phones 4 U went into administration in September 2014, and at the time of writing all its stores are closed (though possibly only temporarily); see photograph of sign in window.

According to a photo on Flickr, as of c. 1985 the occupant of the premises was a branch of Manfield shoe shops.
Existence last checked in August 2014.
North End ...