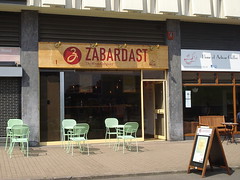 Sandwich shop on Dingwall Road near East Croydon Station. It opened in early 2014. It also has another branch in Centrale, which opened in November 2017.

It's connected internally to Behtareen next door, and Zabardast customers are permitted to sit in the Behtareen seating. In good weather there are also chairs and tables outside on the pavement.