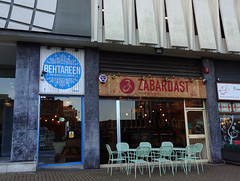 It first opened in early 2014 under the name of Zabardast photo, specialising in wraps with bread choices such as paratha or tortilla and filling choices such as desi omelette or lamb kofta. This was primarily a takeaway, though in good weather there were also chairs and tables outside on the pavement.

In January 2015 a spin-off called Behtareen opened in a previously unused space to the side photo. This initially did a wider range of Indian food, but by April 2017 it had scaled back to doing mainly biryani. It had a narrow frontage but more space behind, so actually had interior seating. Zabardast and Behtareen were connected internally, and Zabardast customers were permitted to sit in the Behtareen seating.

Zabardast opened another branch in Centrale in November 2017.

By December 2019 Behtareen no longer had a separate entrance or website, and the whole thing seemed to be operating under the Zabardast brand.