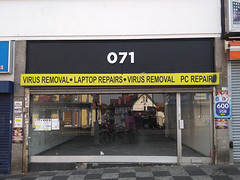 By August 2011 it was known as Computer Repairs photo, but in autumn 2014 it changed ownership and was renamed to 071. As of October 2014 the interior was not quite finished, but it was open for computer and laptop repairs at least photo.

Some time between October 2014 and July 2015 the shop was split into two halves, with 071 on the right-hand side and a mobile phone accessories kiosk on the left-hand side. By October 2015 photo the only part remaining open was the mobile phone kiosk, though according to an A-board outside they still did phone and laptop repairs.

As of early January 2016 a new shopfront was in the process of being fitted, and the mobile phone kiosk had gone. However as of February 2016 it was still vacant, with a shutter permanently down.