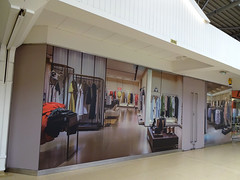 As of May 2016 it was briefly used as a charity pop-up shop photo of shop, photo of sign.

It was previously a clothes shop called Yoke Menswear photo, which described itself as a "G-STAR concept denim Q store". This closed down some time between January and May 2016.