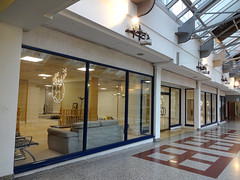 Retail unit on the upper level of the Whitgift Centre. As of December 2019 it's under renovation to open as a wellness centre run by Croydon BME Forum, due to open on 6 January 2020 with an official launch on 16 January. According to a tweet by Councillor Janet Campbell, work on the wellness centre began in October 2019.