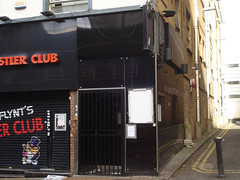 Nightclub premises at the Crown Hill end of Church Street, vacant as of February 2015.

It was previously known as Shooshh photo, but in February 2014 it announced that it was under new management and changing its name to 12-20. However it lost its licence and closed down in May 2014.

The building (which also houses Larry Flynt's and part of the 99p Stores) was constructed in the mid-20th century as an extension photo c. 1965 of the next-door British Home Stores. This took place following the 1956 demolition of the previous building, which had housed the Hippodrome Picture Theatre, previously the Croydon Hippodrome photo from c. 1910, the New Theatre Royal, the Empire Theatre of Varieties, the Theatre Royal, and the Theatre; see Cinema Treasures entry and Theatres and Halls in Croydon for more details.

After British Home Stores vacated the building, it was returned to entertainment use in 1972 as a cinema initially called the Classic Cinema photo from 1972 and later the Oscar Cinema and then the Focus Cinema; see Cinema Treasures entry for more details. The Focus Cinema finally closed in August 1982.

Shooshh opened in mid-2011, replacing Loop Lounge, a "music and pool bar" that had been there since 2003.