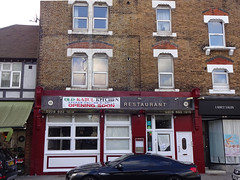 Business premises on Selsdon Road in South Croydon. As of December 2019 it's vacant but has a notice promising that an Afghan restaurant called Old Kabul Kitchen will be opening soon.

It was previously a Mauritian fusion restaurant called Cote d'Azur photo, but in January 2019 a notice appeared in the window photo stating that the restaurant was closed "due to family matters". It never reopened following this.

Until July 2012 the building was occupied by a French restaurant called Le Cassoulet photo. It remained vacant for a while photo, but by July 2013 it was open again as Cote d'Azur. According to Malcolm John (who owned Le Cassoulet), Cote d'Azur had no connection with Malcolm John Restaurants.